DISCLAIMER: This Health Library is for educational purposes only and does not necessarily reflect the services provided by this practice/facility.

Lung cancer is a disease in which cancer cells grow in the lungs. The most common type of lung cancer include:

Lung cancer is the leading cause of cancer deaths in the US for both men and women. 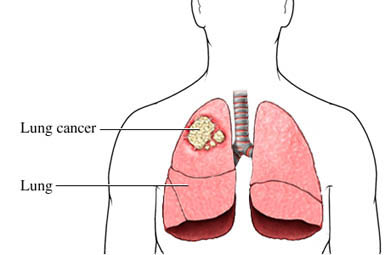 Cancer occurs when cells in the body divide without control or order. Normally, cells divide in a regulated manner. If cells keep dividing uncontrollably when new cells are not needed, a mass of tissue forms, called a growth or tumor. The term cancer refers to malignant growths. These growths can invade nearby tissues. Cancer that has invaded nearby tissues can then spread to other parts of the body.

The following can cause damage to the cells in the lungs, leading to lung cancer:

Factors that may increase your chances of lung cancer:

Imaging tests evaluate the lungs and other structures. These may include:

The physical exam combined with all of your test results, will help to determine the stage of cancer you have. Staging is used to guide your treatment plan. Like other cancers, lung cancer is staged from I-IV. Stage I is a very localized cancer, while stage IV indicates a spread to other parts of the body.

The goal of treatment is to eliminate the cancer and/or control the symptoms.

Surgery involves removing the tumor and nearby tissue. Lymph nodes may also need to be removed. The type of surgery depends on the location of the tumor such as:

Radiation therapy is the use of radiation to kill cancer cells and shrink tumors. This may also be used to relieve symptoms such as shortness of breath. External radiation is usually used to treat lung cancer. With this treatment, radiation is directed at the tumor from a source outside of the body.

Chemotherapy is the use of drugs to kill cancer cells. This may be given in many forms, including pill, injection, and via a catheter. Chemotherapy is often used to kill lung cancer cells that have spread to other parts of the body.

Other treatments that are being researched include:

To help reduce your chances of lung cancer:

The American Lung Association and American Cancer Society both suggest that screening for lung cancer with a low-dose CT scan may be considered if you are a smoker (or former smoker), aged 55-74 years, and have a history of heavy smoking (such as one pack a day for 30 years).

This content is reviewed regularly and is updated when new and relevant evidence is made available. This information is neither intended nor implied to be a substitute for professional medical advice. Always seek the advice of your physician or other qualified health provider prior to starting any new treatment or with questions regarding a medical condition.